We now enter upon the final and most devastating portion of the reign of Pope Clement XIII.  The suppression of the Jesuits in the Italian states of Parma and Naples was almost entirely instigated from abroad by the vain and stupid Bourbon monarchies of Portugal, Spain, and France.  The suppression was brought to the Italian peninsula in order to put immense pressure on the Holy Father in Rome to suppress the entire order throughout the world.  And to find the genesis of this plot we need to revisit our old friend from Portugal the Marquis de Pombal.

De Ravignan cites a secret report sent by a M. de Sémonin, the French chargé d’affaires at the court of Lisbon, to his government on the ironic date of July 14, 1767 wherein he recounts a conversation that he had recently had with the Marquis where Pombal indicated his opinion that the suppression of the Jesuits in Spain had actually created new obstacles to his policies.  My opinion as to why is that if there were in fact any new obstacles for Pombal’s policies it probably had to do with sympathy that had been aroused for the Society of Jesus by the harsh treatment they experienced in the Spanish dominions which I outlined in the previous post.  In any case the Marquis proposed to the French chargé d’affaires, in the name of his own sovereign Joseph I, that the three Bourbon courts of Portugal, Spain, and France join together to demand the extinction of the Jesuit order throughout the world from the Holy See.

The court of Spain was, unsurprisingly, the first to acquiesce to this proposal.  The eagerness with which the Spanish court joined in on the assault on the entire Jesuit order is indicative that there is probably more than a grain of truth in the story that I recounted in the previous post that King Charles III of Spain had been convinced that the Jesuit general in Rome was plotting to use some ill gotten information regarding his birth to remove him from the Spanish throne.  We have the report of a witness, a don Gutierez, that was read out at the hearing of the Council of Castille to reinstate the Jesuit order in Spain in 1815 after the fall of Napoleon that it was decided at a cabinet meeting on October 18, 1767 that the Spanish crown and the Spanish government would pursue the extinction of the Jesuit order.  Lastly, and under pressure from his fellow Bourbon monarchs, King Louis XV of France acquiesced in the plot that would bring down his kingdom and physically remove the head from the body of his successor.  The board was set and the pieces were moving.

I include here a map of the political divisions the Italian peninsula during the 18th century to give an idea of the states that we will briefly discuss here. 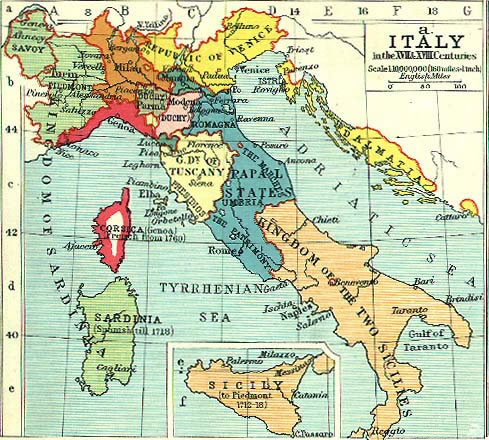 Political divisions of the Italian peninsula during the 18th century.

The Italian peninsula had been an off and on again battleground between France and Spain since the 15th century and as a result both nations wielded considerable influence there.  Naples (The Kingdom of the Two Sicilies) was a dependency of Spain and ruled by a Bourbon monarch.  After the decision of the Spanish court to go after the Jesuits the government of Naples, dominated as it was by the follower of Voltaire Tanucci who overpowered his own sovereign Ferdinand VI, immediately deported all of the Jesuits of Naples to the Papal States.

The most dangerous blow however came from the north; from the small state of Parma and its young and inexperienced duke who was a cousin of Ferdinand VI and under the tutelage of a minister who had drunk the poison of Voltaire and the other French sophists, a certain Frenchman named Dutillot, the Marquis de Félino.

After the expulsion of the Jesuits from Naples this minister induced the duke of Parma to sign a decree on January 14, 1768 that severely limited the rights of the Holy See and of the Catholic Church in the state of Parma.  There is no written evidence to confirm this hypothesis, but none is really needed: this move had to have been designed as a provocation to Pope Clement XIII since the ultimate sovereign of the state of Parma was recognized by public law and tradition to be the Pope, as ruler of the States of the Church, the Patrimony of Saint Peter.  Pope Clement XIII therefore issued a brief on January 30, 1768 annulling the duke’s previous edict of January 14.  In this decree Clement XIII uttered words that have defined the struggle of the Catholic Church, of the whole Mystical Body of Christ, from that day to our own.  He stated that the edict of the duke of Parma sought (translation mine) “to diminish the the rights and the prerogatives of the Holy See, to submit its authority to the secular power, and to reduce to slavery the Church of God, who is free.”  And the firestorm that ensued has yet to go out.

On February 5, 1768 the Bourbon duke of Parma sent troops to expel the Jesuits from that country.  On April 16 the Spanish ambassador to the Holy See presented the Supreme Pontiff with the demands of the courts of France, Spain, and the Two Sicilies.  They were such that the Holy Father must revoke his decree of the previous January 30 and accept the edict issued by the duke of Parma.  And if he did not submit to these demands then French troops would immediately seize the papal possession of Avignon in the south of France and Neapolitan troops would take the duchy of Benevento in the southern part of the Papal states.  Clement XIII refused and the Catholic kings took up arms against the Holy See.  Fools.

Clement XIII declared that he would never take up arms against Catholic kings, but would follow his predecessors into exile before he would submit to a decree that abrogated the rights of the Church.  The situation deteriorated even more as the year 1768 progressed with the Republic of Venice instituting laws that limited ecclesiastical freedom and opened up a new front for the ailing pope.  On January 19, 1769 began the three Bourbon courts who had taken up arms against Holy See issued one last demand to the dying pontiff: the complete and total suppression of the entire Jesuit order.

De Ravignan writes a fitting epitaph to these foolish Bourbon monarchs and to this whole sad and sorry episode.  I will provide my own translation here:

Hapless princes, a race as unfortunate as illustrious, soon the victim of popular furies, rose up against the Church at this hour bringing to a common ruin all the political and religious institutions that had been the slow and admirable work of centuries!  And these ruins have not yet been raised up!

The kings of France, of Spain, and of the Two Sicilies thus joined together in a formidable league with the duke of Parma: and against who? against a venerable old man, bent towards the tomb, who on earth was the successor of a Galilean fisherman.  He possessed no other real power save the sacred right and duty to watch over the flock of Jesus Christ; but this flock it is the Church against whom the powers of the earth and of Hell would never prevail.

Pope Clement XIII died on the night of February 2-3, 1769 after offering Mass on the Feast of the Purification.  It was his fate to be at the pilot’s wheel of the Barque of Peter as it entered the outer bands of an immense hurricane and it will be for those who opine on these things once that storm has passed to pass judgment on his pontificate.  I know that wouldn’t have wanted his job.

Go to Confession and please say three Hail Marys in honor of the Immaculate Heart of Mary.

Like Loading...
This entry was posted in The Suppression of the Jesuits and tagged 1767, 1768, 1769, bourbons, catholic, catholic church, charles iii, clement xiii, conspiracy, conspiracy to destroy the teaching of jesus christ, de ravignan, naples, parma, pombal, suppression of the jesuits, tanucci. Bookmark the permalink.