Nine months after the murder of King Louis XVI in the Place de la Révolution and scarcely a week after the murder of his wife Queen Marie Antoinette the revolutionary government of France, the National Convention, adopted a very new and a very strange calendar on October 24, 1793.

The start of this calendar was to be and its reference point was to be September 22, 1792 the day on which the French Republic was declared.  The reference point for that most Catholic of countries would no longer be the birth of Jesus Christ, the advent of the Eternal Word made flesh, the coming of the Divine Redeemer of mankind.  No, it was instead going to be the birthday of that disastrously ill-fated république.

But that was not the strangest part.  The seven day week was abolished.  Instead each month of thirty days was to be divided into three décades.  So in effect instead of seven days the week was now ten, with the tenth being a day of rest and/or government approved worship of human reason or of some unknown unnamed ‘supreme being.’

The implications of this are obvious.  The six days of creation and the seventh day of rest were to be eliminated from human memory.  And the first day of the week the day of the Resurrection, Sunday, was just simply to disappear.  The chief architect of the calendar Charles Gilbert-Romme said as much at the time.  When asked what the object of his calendar was Romme simply replied (The French Revolution, Gaxotte, 1932, p. 329):

After Napoleon Bonaparte overthrew the revolutionary government and reestablished a still somewhat shaky relationship with the Catholic Church this calendar receded and was finally done away with on January 1, 1806.  But where did it come from?

I recently ran across an image of a pamphlet here published by the Convention in either 1793 or 1794 concerning the republican calendar that may help us to answer that question: 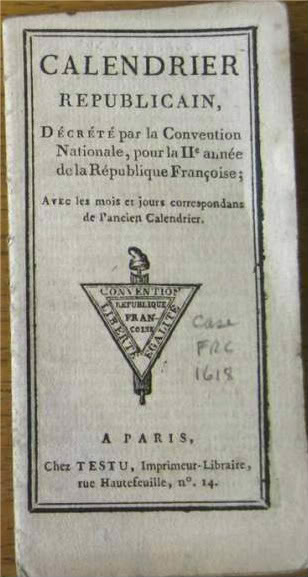 Note the upside down triangle.  What a curious symbol!  And not one that we would typically associate with the French Revolution.  The equilateral triangle however has been, and remains, a very prominent occult symbol of Freemasonry.

And the words written in the triangle.  The Convention representing the regime followed by two words: liberté and égalité.  But what about fraternité?  It wasn’t there.  The self-contradictory ideals of complete and total personal liberty and complete and total collective equality which cannot coexist; the striving for both of which at the same time causes a society to rip itself to pieces which was then and remains the goal of this conspiracy.

There was no fraternité.  That was added later by the French people when they had to reimagine things to make sense of the crimes that had been committed in their name on their land.  Real brotherhood both within and among nations only comes via the Catholic Church who by her Sacraments and Teaching heals the wounds of fallen man and curbs his passions and worst instincts.

Please go to Confession and say three Hail Marys in honor of the Immaculate Heart of Mary.